The Diamond stands for a timeless and yet equally modern and elegant emblem, much in the same way that our unique project stands for. The Diamond Heights is a rare-find, an exclusive gated subdivision made for an intimate neighborhood. Only five minutes away from the Davao Airport, this project offering will rise on a fast-developing area, fit for Davao’s up and coming, prestigious community.

Davao City is the largest city in the country in terms of land area. A highly-urbanized city, it is the main trade center in the whole island of Mindanao with agriculture being its main and largest economic sector. It is dubbed as the “Durian Capital of the Philippines” and as one of the safest cities in the world.

The Diamond Heights is a development project that can be found in Downtown Davao, specifically in Brgy. Communal, Buhangin, Davao City. It is strategically situated just a 1.8 kilometers away from the Davao International Airport or otherwise known as Francisco Bangoy International Airport. Several highly organized modes of public transportation are prominent in the city, which include multi-cabs, buses, tricycles, jeepneys, and taxis. There are also habal-habal passenger motorcycles in some parts of Davao, especially in mountainous areas. Further, the city is also easily accessible to and from other provinces in Mindanao, Metro Manila in Luzon, and other provinces in the Visayas either via buses, RORO (roll-on/roll-off) inter-island ferries, or air transport.

Being situated in a prime location, the Diamond Heights is highly accessible to a wide choice of establishments that will cater to the needs of its every resident. Davao City has 31 hospitals and tertiary centers and some of these can easily be accessed from the Diamond Heights subdivision. The Davao Doctors Hospital, the largest and most advanced hospital in the city, is privately-owned and a level four tertiary hospital with multiple specialties. It is just within the 10.5 km distance from the property and can be reached in about 30 to 40 minutes via private transportation or in 1 hour via bus public transportation. A training hospital known as the San Pedro Hospital, on the other hand, is within the 8.9 km distance. Other hospitals within the city are the following: Southern Philippines Medical Center (5.6 km), CHDC Hospital and the Southern Philippines Medical Center (5.7 km), Metro Davao Medical and Research Center (6.6 km), Davao Medical School Foundation Hospital (DMSF Hospital) (8.8 km), Ricardo Limso Medical Center (10.6 km), Brokenshire Memorial Hospital (10.7 km). In addition, there are numerous animal health clinics located within the city that will address the health concerns and needs of the residents’ pets. There are also several dental clinics within the vicinity and some of which are the Tooth and Beyond Dental Clinic (5.5 km), the Dental World (3.4 km), and the Hao Medical and Dental Clinic (4.3 km).

As for the educational institutions, there is as well a vast range of options for the parents to choose from for the education of their children. There are several public schools in the area such as the Buhangin Elementary School (4.8 km), the Bernardo Carpio National High School (5.5 km), and the Dumanlas Elementary School (5.0 km). On the other hand, some of the private schools near the community are the Child of God Learning Center (3.9 km), Colegio de San Ignacio (5.9 km), Star Child Innovative Learning Academy (5.5 km), and Immanuel School of Davao Incorporation (6.5 km). Davao City is home to five universities such as the University of Southeastern Philippines (7.8 km), the Ateneo de Davao University (10.8 km), the University of the Immaculate Conception (5.7 km), the University of Mindanao (11.1 km), and the University of the Philippines Mindanao (26.4 km) and many tertiary institutions like the Holy Cross of Davao College (9.1 km), the St. Paul College - Davao Campus (8.6 km), the Assumption College of Davao (7.7 km), and the Rizal Memorial Colleges (9.6 km) among many others.

The Diamond Heights is also in close proximity to a number of shopping malls, supermarkets, and other commercial establishments within the city. The Gaisano Mall of Davao (8.8 km), also known as the GMall, is one of the major shopping malls in the city and is owned and operated by the DSG Sons Group. It has eight floor levels of retail stores, arcades, food hall and restaurants, eight cinemas, and all kinds of shops. Another major mall in the city is the SM Lanang Premier, which is relatively nearer to the community which is within the 6.0 km distance. Known by the locals as SM Lanang, it is an indoor four-storey shopping mall managed by the SM Prime Holdings company and the 2nd largest shopping mall in Mindanao comprised of a total of 273 stores, a wide choice of restaurants, a bowling center, six cinemas and an IMAX Theater, the SMX Convention Center, the SM Store and SM Supermarket, the SM Science Discovery Center, and an Al fresco dining area. Another SM mall in the city is the SM City Davao, which is within the 17.7 km distance from the Diamond Heights subdivision. Locally known as SM Ecoland, SM City Davao is a three-floor shopping mall established in 2001. It also has the SM Store, SM Supermarket, and SM Cinemas, along with several retail shops, restaurants and other food establishments. Abreeza Mall (7.0 km), on the other hand, is the first Ayala Shopping Center in Mindanao. Other shopping establishments include the Robinsons Cybergate (6.1 km) and the Damosa Gateway (5.1 km). 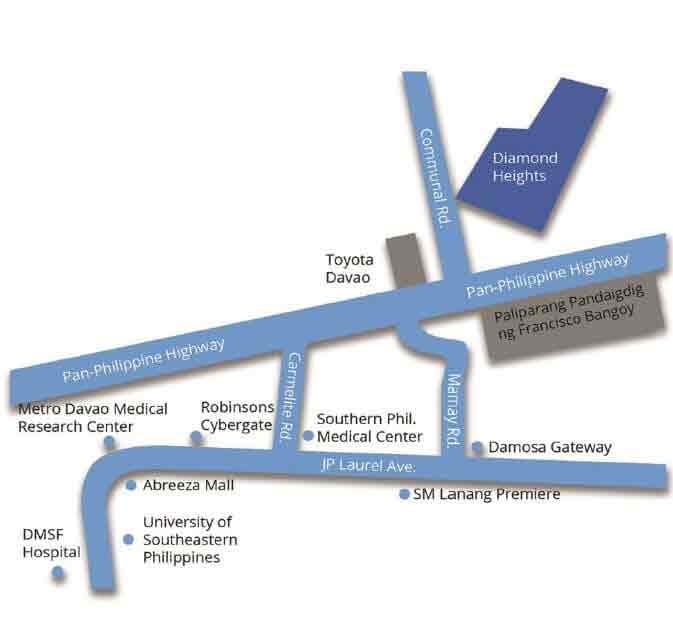